The full skirt with long blouse that formed the traditional teenage dress of malayale girls is fast disappearing from the Kerala fashion scene. It however, is still worn by village girls though their counter parts in the city have slowly discarded it. On ceremonial occasions and festival days the long skirt with pleats and kasavu Boarder with front or back open blouse is worn.

With the advent of the North Indian fashion dress on a large scale in kerala, the half sari dress is seldom seen in any part of kerala. The half sari that was worn earlier consisted of a full skirt, short blouse and a davani (shawl) and sari blouse.

The demand for the set mundu among the women of kerala contrary to general belief is in fact growing. It is a form of sari in two sets worn with a blouse. Used primarily on festival occasions like onam and vishu and for visiting temples, the set mundu is available in Sandal wood color or white color with silk border or colored border. It is worn in the same fashion of a sari, but without pleats in the front. Though initially intended as a ceremonial dresses in the ancient times it has however attained a position of being worn by both young and old on all occasions.

From very ancient times sari has been closely associated with the women of kerala and it still forms the major mode of dress even today. A 5 meter long cloth, It is worn together with a small blouse .It is however a tough job to learn to wear a sari in a proper manner and one needs to practice a lot.

Sari is the official dress in various ceremonies like wedding, engagement and during various festivals in kerala.

Kerala's sari market is now flooded with sari like

Though a north Indian dress the salwar kameez in kerala has become a craze among the younger generations. It’s acceptance is to a large extent due to its unique and outstanding styles and convenience. The comfort that salwar kameez provides has made it so popular that it is worn on formal and non formal occasions.

In kerala tradition always played a prominent part in the acceptance of every form of modern dress circulating in the country.

Lehnga is steeped in tradition and its history can be traced to the mughal royalty. Considered the apt dress on ceremonial occasions and worn by people of royal blood in olden days, lehngas come in many different styles. Lehangas are glamorous and elaborate. Rich fabrics such as silk, organza, jamewars and brocades have been used lavishly in lehengas. The creations are inspired by the timeless traditional motifs and contemporary patterns. The colors are bright in hues of reds, oranges, maroons, and gold. Considered to be the most appropriate feminine dress lehengas are available in a variety of sizes. It has become so popular in kerala that lehanga has replaced the traditional sari among a large chunk of the younger generations. It is also considered to be the best wear during the day and evening time.

Though a late entrant to the kerala fashions scene, the kurtas have captured the imagination and fashion demands of a large portion of the younger feminine folk.

and your skin and Kurtas often feature the long sleeves you need to cover-up after a bout of sunbathing. What sets the garment apart is often the embroidery. Zardozi, traditional gold and silver wire embroidery has been superseded by plain thread embroidery to give the under-stated, yet elegant look for the daytime. Chikankari is a lovely work, which involves intricate shadow type of embroidery done on white yarn. The Kurti is unlikely to die. Trends may change, chikankari work may be superseded by phulkari and the style may push the boundaries with ever more transparent tunics, but when it comes to comfort, style, and sheer wear ability there is little to beat the humble Tunic.

The most common dress among the Hindu women is either a set and mundu or a colored sari. As the wedding day is considered one of the most important days of their life every effort is made to make this occasion truly memorable. Kanchepurum saris considered the finest in kerala is worn on this auspicious day Saris of other makes including those from silk, georgettes and crape are also worn. Bridal dresses presently come with Zari, embroidery, zardosi, sequence, cut work, mirror work, patchwork, pearl work, kasab and kundan that all add a touch of class and beauty to the the sari worn.

The bridal dress worn by the Christian women is peculiar in that it is different from the dress worn by the Hindus and Muslim women. A Christian woman wears a purely white sari with a white veil on their head symbolizing purity. Nowadays designer made bridal gowns are also rather popular. Bridal gowns are traditionally of a single color, depending on our culture., brides wear white or ivory gowns.

Muslimwomen usually wear bright colored silk saris on their wedding days. The lehnga that was the traditional dress during the mughal period is also worn by a large number of Muslim women now. The dupatta is worn as a headdress along with this lehnga. This combination increases the visual beauty of the lehnga. The dupatta was made of a flimsy material and to give some more weight to the cloth, golden lace or tassels were attached to the ends.

nd Tamil Nadu. It is not seen very common now in cities and towns but usually worn by village girls.
The latest fashion of Kerala is full skirt with pleats and Kasavu Boarder and long blowse of Kasavu boarder with front or back open and is worn at special occations and festivals. Also silk materials with different bright colours are used for stitching custom made full skirt and blouse.

If the songs, `Pavada prayathil' and `Pavadai davaniyil', were to be written today, the lyrics would not be the same.
For, the pavada has almost vanished from the Malayali girl's wardrobe.
This pleated traditional dress has been replaced by jeans, trousers, salwar kurtas, midis and skirts.
In Kerala, only the `bold' wore the salwar kurta two decades ago. And then came the invasion of the electronic media and salwar kurtas found their way into the hearts of Malayali girls.

If you want to see Malayali girls in pattu pavada-blouse sets today, then you have to be invited to a wedding. Or you should visit a temple or wait for November 1 (Kerala Piravi Day).

The pavada has its western counterpart: the skirt. What had flowed down over the ankles during the Victorian era has, over the years, transformed itself to the midi, the mini and the micro skirts, all of progressively decreasing length. Micros and minis may be the rage in Indian metros, but Thiruvananthapuram is yet to catch up with this trend.

Unlike the saree or the salwar-kameez, the half-saree is very age-specific. Itexclusively belongs to young women and no woman past her teens would usually wear it.The half-saree marks a sartorial transition from girlhood to womanhood. It combines the impishness of a girl with the feminine grace of a young woman.That is one reaso

n perhaps why south Indian filmmakers are rediscovering the half-saree, giving the garment a fresh lease of life.
Half Saree was very common among young girls of Kerala and Tamil Nadu. Full skirt, short blouse and a davani (shawl) constitutes this dress style.

It is considered to be originated in Tamil Nadu, but is very commonly used in Kerala till about 30 years back. Nowadays with all modern fashions half saree is almost completely diappeared among Kerala girls. 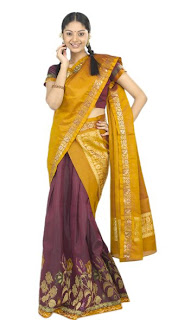 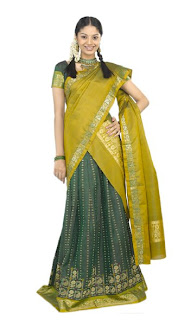 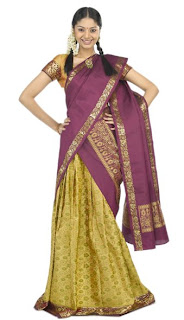 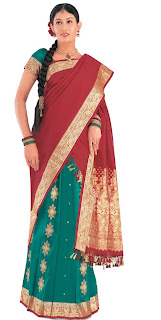 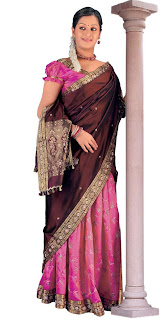 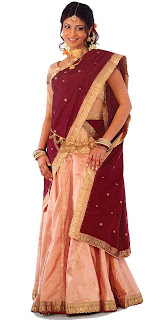 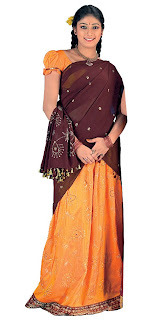 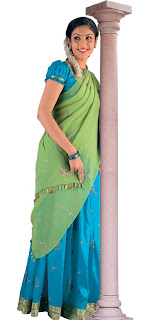 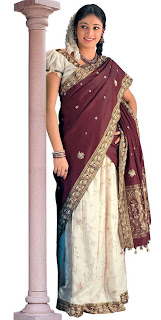 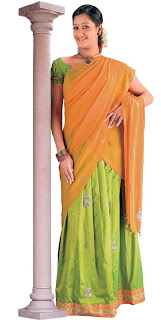 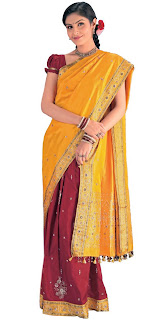 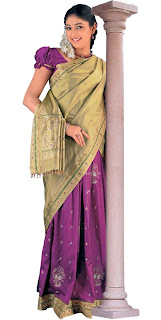 3 thoughts on “This dressing style we are expecting from – KERALA WOMEN,,,,,,, what a style”